This is the first interview of what I hope will turn in a series of women that in one way or another are related to HIV. It might be because they are trying to make a better world for those living with HIV. Or because they are researching the way the virus work. Or they are fighting stigma and discrimination… And they are doing it with style. I met Silvia Petretti a few years ago, and she reminds of a typhon. One that instead of destroying crops and making cattle fly across the sky, brings new seeds and water into desert farms. This is of course a metaphor. Those desert farms are people that are fighting HIV day after day. With no further presentations, let´s hear what she has to say. 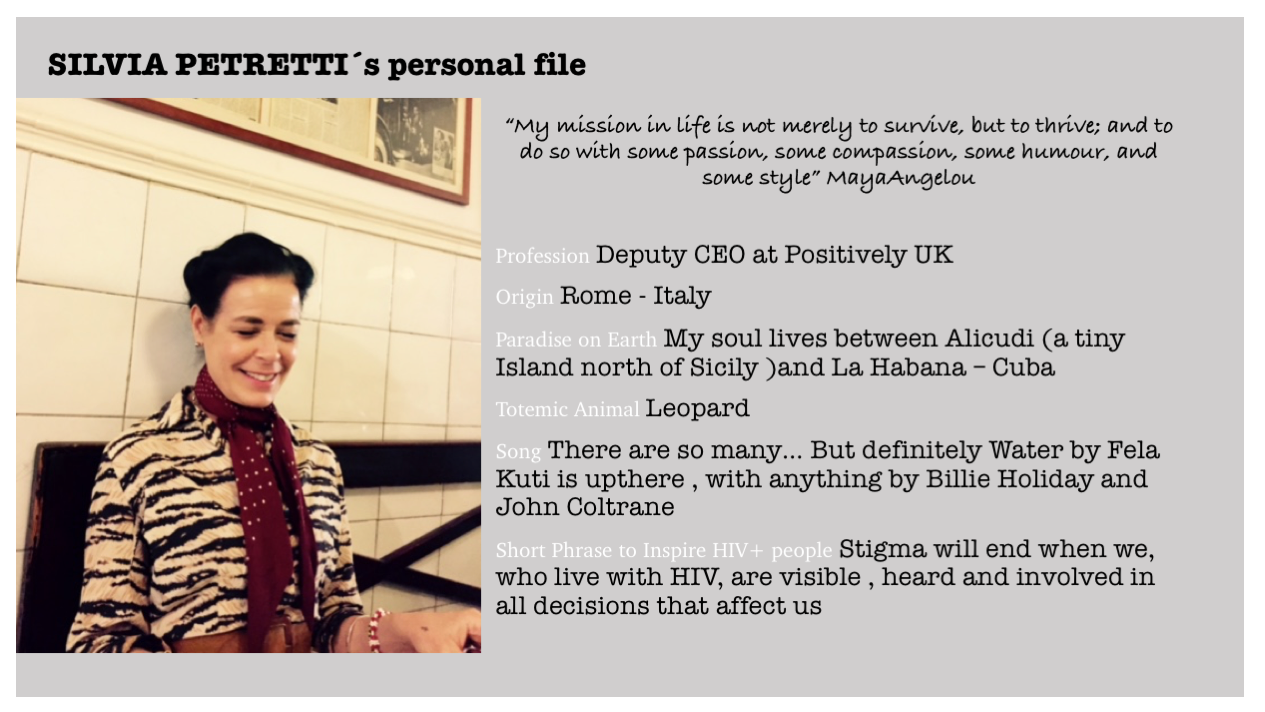 My name is Silvia, I am a woman living with HIV, a cat lover, a world traveler, I wear vintage clothes and I am a bit of a revolutionary… !

2- Your relationship with HIV (past or present, whatever you want to share)

I was diagnosed with HIV 20 years ago, when I was just 30 years old. I probably acquired HIV in my 20’s. As a young woman it was very difficult to negotiate condoms. Especially in a sexist and machistic country like Italy. I hate questions about how I got HIV. I find these questions very judgmental. Whether I say that I got HIV by selling sex, injecting drugs, from my husband or my mother in the womb, this puts me in a category.  Either I’m an innocent victim or somebody reckless, who got what they deserved. It’s the reason so many women living with HIV shy away from the media. It doesn’t matter how I got HIV. It matters how I live with it.

3- Objectives in your advocacy/professional life

I want to see a world free of stigma, where all people living with HIV are safe, respected, and have access to good health services, including ARVS, work, housing and everything  we need for a decent life.

4-Do you think there are differences if you are a positive woman when compared to men?

Women are biologically, and socially very different from men. Our bodies and roles change dramatically throughout our lives from onset of puberty, through the reproductive years, to the menopause. We have far more hormonal changes. Focus on women and hormonal changes should includes Trans women who also have to use hormones during transition. Much more research needs to be done on how women, including trans women,  are affected by HIV and ARV’s throughout our lives.  On the social side,  gender inequality and violence agains women and girls are driving forces behind the HIV epidemic. We know that when women have less power, for example limited access to economic resources, money, business opportunities etc , they are poor and more vulnerable to HIV. Women with HIV often live in poverty, not just in Africa but also on our doorsteps in Europe.

Moreover there is a strong link between HIV and Violence against women. Women who experience violence are much more likely to be living with HIV, because they cannot negotiate condoms. And once they are HIV positive the violence can escalate (or sometimes start), and it is much more difficult to leave the relationship. Women often fear that nobody will date them  because they have HIV. This still happens, even nowdays when we know really well that people who are on treatment and have an undetectable viral load cannot transmit HIV sexually.  Medical adveances are very slow at being divulged to the wider community. While we have pills for HIV, we still do not have pills for stigma and violence. 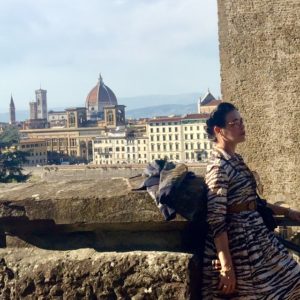 When I got my HIV diagnosis I felt damaged, tainted broken. Internalised stigma crushed me and was reinforced but the stigma and ignorance in main stream society. But through meeting others living with HIV and becoming  and activist I found a form of therapy and healing. I know believe and feel that I am whole and strong and worthy of love and respect, regardless of any circumstance.

I would really recommend that you meet people living with HIV and don’t isolate yourself.

I would also recommend that you learn about the history of the movement of people living with HIV. Watch films such as United in Anger ( on Act Up in New York in the ‘80s and ‘90s.) and the role they played in the development and availability of ARVs The medications we have , the good services we have, are the result of the struggle of people living with HIV.  They weren’t just given to us. If we want a better world for ourselves we need to actively create it, together.

6- Any funny story you want to share about HIV?

Once, many years ago,  I started to date a guy, After a couple of dates I realized  I didn’t particularly like him. But he was really into me and was petering me with calls. So I thought: ‘ Let me tell him I have HIV so I can get rid of him…’ When I told him I was HIV positive he was like :

I was quite dismayed! It was extremely difficult to convince him we weren’t a good match…!

Get to know Silvia´s work at Positively UK

Or you can read her blog Speaking Up